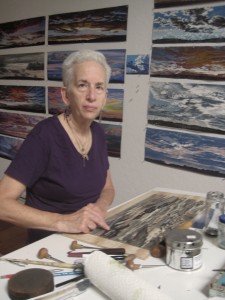 Shirley Bernstein was born in Philadelphia, Pennsylvania. She earned her BFA at the University of the Arts (formerly Philadelphia College of Art) and earned her MFA from Indiana University in Bloomington, IN. She majored in printmaking and minored in painting and drawing.

Shirley describes her work as organic abstractions in response to forms experienced through observation, both visual and emotional, of nature. She spent most of her adult life in New York City. When she moved to the rural northeast corner of Connecticut, she became captivated with the beauty of the land and sky and has been creating oil pastel paintings and prints of all kinds of skies since. Although her focus is primarily looking to the heavens for inspiration, she also enjoys drawing the figure and other natural forms.

She has an extensive exhibition record that includes both her oil pastels and prints and has shown her work both nationally and internationally. Her work is in the collections of Pacific Rim International Print collection, The Newport Museum, Robert Blackburn Collection at the Library of Congress, Slater Museum, Indiana University Museum, National Museum of Women in the Arts, Elizabeth Foundation for the Arts, Union Carbide Corp., Neiman Marcus, Arjo Wiggins, Eastern CT State College, Wheaton College Rare Books, Staubiz Design, Dodd Center Special Collections at UCONN and Fairfield University, as well as private collection in the US, Europe and the Middle East.

While keeping up with a busy exhibition schedule, Shirley was also a dedicated art teacher and takes pride in her professional affiliations. She received the Teaching Excellence Award at Quinebaug Valley Community College where she retired from in 2013. She has also taught at the University of Connecticut, Eastern Connecticut State University, Cooper Union, NYC, Indiana University, IN, Kean University, NJ, Beaver College, PA, University of the Arts, PA, Fashion Institute, NYC and Knoxville College, TN.

Shirley was Artist of the Month in March for the Oil Pastel Society of America. She is a founding member of the Printmakers Network of Southern New England and has been in eight print portfolios, as well as a book of poetry and prints with the group. She is also a member of the Society of American Graphic Artists, NYC, the Los Angeles Printmakers Society, the Boston Printmakers and the Wood Engraver’s Society. She received the 75th Anniversary Award in a traveling exhibition in England from the Wood Engraver’s Society. She was awarded the Zea Mays printmaking prize at the Boston Printmakers 2015 Biennial. Shirley’s work was exhibited in “Horizons” which toured Cork, Ireland, Odense and Denmark. She has shown her work at the 15th Lessedra World Print Annual Mini Print 2016 in Sofia, Bulgaria. In 2018 her entry in “Foot Print” at the Center for Contemporary Printmaking in Norwalk, Ct was awarded honorable mention.